You are here: Home » Blockchain » Ethereum vs Ethereum Classic: What is the difference? 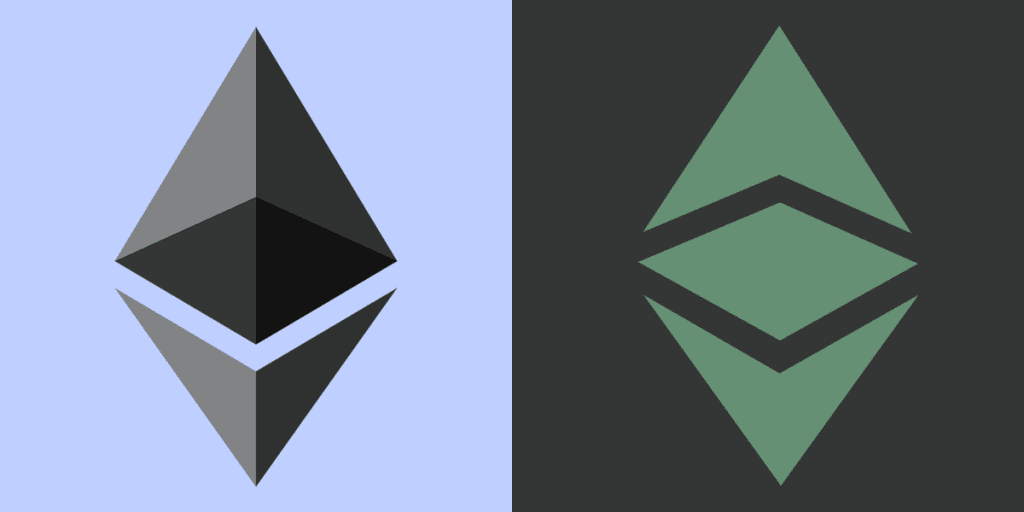 Recently the Ethereum vs Ethereum Classic question came up. As somebody who actively witnessed the launch of both in real time, I thought it worth sharing some of the facts and my resulting opinions. So let’s get started…

What is the difference between Ethereum vs Ethereum Classic?

Ethereum (ETH) is a blockchain based system inspired by Bitcoin but built from the ground up to have far more functionality. To quote the official Ethereum website:

“Ethereum is a  decentralized platform that runs smart contracts: applications that run exactly as programmed without any possibility of downtime, censorship, fraud or third party interference.”

Ethereum Classic (ETC) is a forked version of Ethereum that was activated around July 20th 2016, or more specifically block 1920000, when a controversial fork went through to prevent access to stolen funds from a project known as The DAO.  To quote the Ethereum Classic website:

“Ethereum Classic is a decentralized platform that runs smart contracts: applications that run exactly as programmed without any possibility of downtime, censorship, fraud or third party interference.

Ethereum Classic is a continuation of the original Ethereum blockchain – the classic version preserving untampered history; free from external interference and subjective tampering of transactions.”

As these two statements show the technological goals remain the same for both systems. In fact the core differentiator between the two at this stage is whether or not a $50 million+ hack of a record breaking crowdfunding project called The DAO was allowed to continue or not. Time for a little (recent) history…

An Introduction to The DAO

Several teams were expected to submit proposals to The DAO for projects such as building a physical ethereum computer, virtual reality labs, blockchain based charity initiatives, robotics and a portable cold storage wallet. If Token Holders didn’t approve of any projects they could simply sell their tokens or exchange them via The DAO to refund any remaining Ethereum they had contributed.

Despite many rounds of testing a bug was found in some Solidity code that was being used and referenced across many Ethereum contracts including The DAO. Several contract developers immediately took preventative action however this was not immediately possible with The DAO due to it’s decentralised control structures and several days later an attack was launched moving $50 million of the $150 million worth of Ethereum to a new contract without approval of the token holders. In simple terms; a software bug was exploited to steal $50 Million dollars worth of Ethereum.

Due to a feature of The DAO code, Ethereum stolen from The DAO were locked in the thief’s contract after the hack for a period of 28 days at which point they were completely isolated from entering the rest of the network. This gave the Ethereum community time to unite and craft plans to prevent the stolen Ethereum from being accessed by the thief.

After several layers of defensive measures were undertaken and possibilities were discussed, the final conclusion was that a hard fork was the only realistic method of preventing the stolen funds from being either released or locked into a potentially endless battle between rival contracts controlled by all sides. A hard fork would essentially mean updating the core Ethereum software itself, not just a contract running on the system, so that the stolen funds would be transferred to a contract where the original owners of the Ethereum could reclaim it.

Ultimately the Ethereum software was modified so that users could select whether they wanted to fork or not. However a default option was required and as this had a big potential to influence the direction of the decision a vote open to anybody holding Ethereum. With time running out the vote only lasted for 12 hours however the overwhelming majority of participants voted for the hard fork to go ahead.

Whenever a hard fork activates on any blockchain, the result is two competing blockchains become technically possible. This has already happened for system upgrades many times on Ethereum, Bitcoin and many other blockchain based systems. Usually the old chain falls out of use within a very short space of time as people upgrade their software and this looked to follow the same pattern initially and this appeared to happen.

Even though this particular hard fork was controversial, approximately 85% opted for the new forked chain which recovered the stolen funds.  A vocal minority still declared the new chain to be invalid and began calling for continued support of the old chain as “Ethereum Classic”. However over the following hours and days the Ethereum Foundation declared the hard fork a success and consensus appeared to emerge with several official entities involved with Ethereum projects declaring their support for the winning chain.

Several days later and without warning a popular US based online exchange called Poloniex announced they would support trading of Ethereum Classic immediately. Overnight this brought perceived legitimacy and an actual market value to Ethereum that existed on the old chain. Everyone that held Ethereum at the time of the fork already held assets on both versions of the chain due to the technicalities of a fork. By adding Ethereum Classic to a live market, a groundswell of people who previously had no desire to participate in the chain were then economically incentivised to profit from speculation on the dying chain.

This also created an alternative (although arguably original) reality where suddenly the hacked funds were available and fungible again within the Ethereum Classic network enabling the hacker(s) to profit from the theft. Around this time a collective of people, many who didn’t care about the Ethereum vision previously, suddenly became very vocal supporters of the “original ethereum” aka Ethereum Classic.

The Original Motive Behind Ethereum Classic

I strongly suspect that beyond a minority protesting and outdated Ethereum mining rigs, profit was the primary purpose of promoting Ethereum Classic at it’s outset. The string of actions created volatility leading to more high return short-term trading opportunities, increased trading activity, brought fee revenue to exchanges (others joined the market shortly after Poloniex’s announcement), and the hacker walked away with assets that were swiftly traded into obscurity.

The history of how Ethereum Classic came to be is important because it demonstrates the various market forces and agendas that brought it into being. The origins are starkly different from the official Ethereum network’s white paper which was inspired by Bitcoin and grew from the vision to create and develop an entirely different type of blockchain network and arguably evolving and enriching much of blockchain ecosystem further in the process.

The blockchain world rapidly evolves and even in the relatively short space of time that has passed, both the Ethereum and Ethereum Classic chains have been forced to fork due to other issues in the system. Additionally Ethereum Classic underwent another hard fork by choice to fully deviate from the original upgrade path laid out for Ethereum consolidating it’s position as an Ethereum-Alternative rather than the original vision of Ethereum it first claimed to represent.

The market reflection of these developments as of March 21st, 2017 stands at approximately ~$3.9 Billion market cap for Ethereum vs a ~$0.2 Billion market cap for Ethereum classic. That means that the Ethereum market is valued at almost 20 times Ethereum Classic. But with a valuation of $200+ Million Ethereum Classic is definitely not the dead chain that many were predicting at the time of the hard fork in July 2016.

I won’t make any predictions about either or claim superiority in this post. But for the purpose of clarity a few things are known: